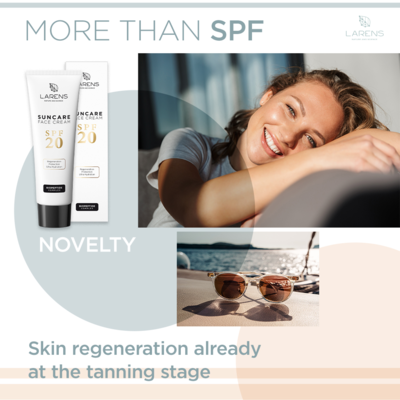 We present a novelty from the brand Larens: an original combination of safe sunscreens, fish collagen peptides and natural skin regenerating substances. Protective and regenerating Suncare Face Cream SPF 20 for the face, neck and cleavage is an innovative concept that involves intensive skin regeneration already during tanning.

PHOTO-AGING IS A FACT

Among the factors that contribute to extrinsic skin aging, exposure to ultraviolet radiation has the most significant impact on its appearance. The changes caused by long-term exposure of the skin to UV radiation are called photo-aging. On the skin, it is manifested by excessive pigmentation, the formation of wrinkles, flabbiness, dryness and roughness of the skin and telangiectasia. The energy of the electromagnetic radiation of the Sun, expressed in the air as ultraviolet radiation, induces not only the premature aging process of the skin, but also the development of neoplasms. A cream with a good, safe filter is a shield that protects beauty and health.

FOR EVERYDAY WEAR, ALSO UNDER MAKEUP

Creams with a filter, i.e. ... greasy, rolling, bleaching cosmetics that prevent makeup or drastically reduce its durability?
Relax, it's all in the past. We took up the challenge and added a SPF 20 cream with a light, quickly absorbing formula to the product portfolio..
Applying it under makeup is pure pleasure. It is enhanced by the delicate, refreshing scent of coconut water that takes you straight to a tropical island. That's it when it comes to subjective feelings and application properties. Now let's take a look at the facts.

The UV sun protection in the Suncare Face Cream is provided by the Amiloxate filter (Isoamyl p-methoxycinnamate), which, thanks to the ability to absorb UVB radiation, protects the skin against sunburn and photo-aging of the skin. It also has an anti-inflammatory and soothing effect, and reduces swelling on the skin.
The spectrum of UVA protection is extended by Booster SPF, an ingredient containing the plant extract of Pongamia Pinnata, rich in oleic acid softening and smoothing the epidermis. It also contains ferulic acid - a strong antioxidant that slows down the aging processes caused by excessive exposure to the sun, helps to reduce discoloration, moisturizes and stimulates collagen synthesis. It helps in reducing discoloration and supports couperose skin.
Order new: Suncare Face Cream SPF 20>>>

Intensive skin regeneration is ensured by: Biopeptide Complex patented by WellU, Asian pennywort extract, gluconolactone, zinc gluconate and allantoin. The first two ingredients are anti-inflammatory and help to reduce discoloration and small scars on the skin. Gluconolactone, zinc gluconate and allantoin along with the HSP protein* stimulating fish collagen peptides alleviate the undesirable consequences of excessive sun exposure.
Ultra-moisturizing and protection against transdermal water loss thanks to liposomal hyaluronic acid and Asian pennywort extract.
For many of you it will be important to know that the product does not contain phenoxyethanol, PVP, parabens, microplastics, nylon, SLS.
The unique Biopeptide Complex in combination with a natural sunscreen and regenerating active ingredients provides safe protection combined with care during sunbathing. It’s a must have this summer!
Order new: Suncare Face Cream SPF 20>>>
-------------------------------------------------------------------------------
* HSP proteins
As research shows, the peptides contained in the Biopeptide Complex are directly related to the increased activity of the HSP heat shock proteins. HSP proteins (Heat shock proteins) have been the focus of biochemistry for decades. Structural and functional studies conducted over the years have shown how many important functions these proteins play. The essential of them is their increased synthesis under the influence of increased temperature, which results in effective protection against burns and increased regeneration of the body. These proteins are colloquially called "molecular guardians" due to the fact that they protect other proteins against denaturation, improper gene assembly processes, and aggregation. Participation in many immunochemical reactions makes them a key role in regenerative processes at the molecular level. They also prevent the development of blood vessel diseases. These proteins are activated in response to inflammation, skin disruption, frostbite or sunburn. This means that the skin regenerates much faster. This complex also includes histones, decorin and lumican, which, acting synergistically, lead to the activation of skin repair processes.
Return to list